We went to Baler, Aurora for our 2nd Wedding Anniversary because I have been missing the beach and surfing. I’ve stopped for 3 years because I got pregnant, gave birth, and we lived in Serbia (which is land-locked) for more than a year… And I gained so much weight. 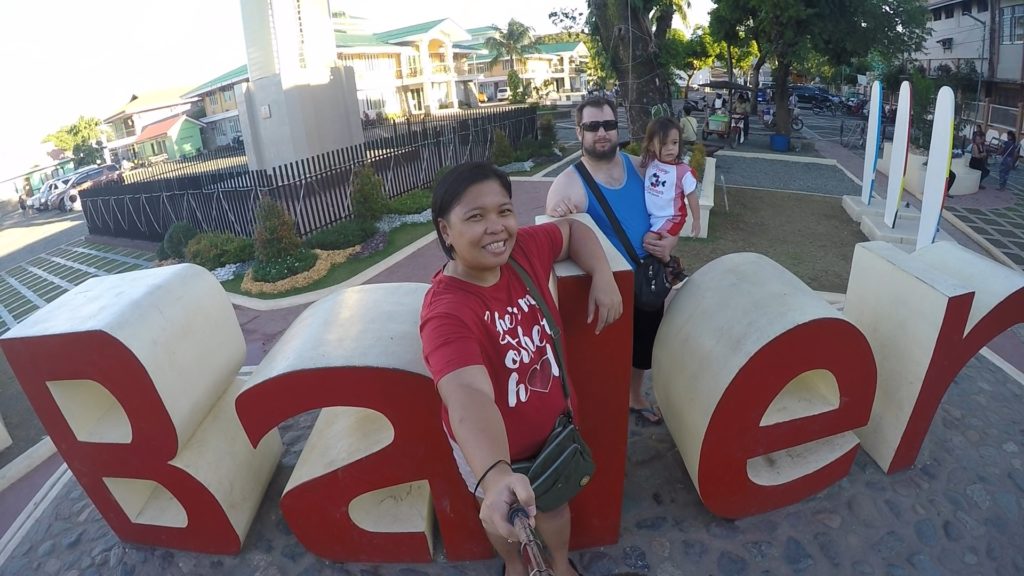 Due to budget restrictions, we originally planned to stay at home. We just arrived in the Philippines from Serbia, and tickets and my husband’s Philippine immigrant visa are a bit costly. Add to that the downpayment for the condo we are staying in now… We just wanted to breathe from all the expenses.

But anniversaries happen only once a year. So, even when we are planning to stay home, every day I would search for places to go to which won’t break the bank. We were both okay to sleep in tents, but having a year-old kiddo, I had to put into consideration her comfort, too.

I already had a few places in mind but my eyes would always go back to Baler… I just wanted to try surfing again rankhaya.com/. Baler is close to my heart because this is where I learned to surf.

We booked a small cottage with its own bathroom at Old Parola Seaside Cottages for only Php1800 a night, because (1) they are the cheapest we could find that actually has a beachfront, (2) they have good reviews, and (3) I was amazed by the photos. We also booked our JoyBus tickets ahead of time because I know how hard it is to buy tickets at the station especially if it’s in season. The price of one ticket is Php650, kids are free.

I wanted to leave at midnight so we can fully enjoy the beach, but my husband has work ’til 2am, so we left the house and booked a Grab as soon as he was done. I was surprised that we were able to book a car fast. I didn’t know there will be cars in the wee hours of the morning. We reached the station an hour before our scheduled departure.

I thought I’d be carrying my daughter, who was 20 months old at that time while she was sleeping, but she actually woke up before me and went back to sleep for the duration of the bus ride. I thought I’d have a problem keeping her seated with all her high energy. She woke up a couple of hours before we arrived, but good thing I memorized so many children’s songs that we just sang all the way to Baler.

From the bus station at Baler, we took a tricycle (Php20/person)  to Old Parola. The weather was gloomy, the establishments are still trying to get back up, many are still under construction, and the beach was very dirty. We were told that it has always been like that because the cottages are closer to the mouth of the river. I beg to disagree! I was in Baler in 2014 and stayed at the far end of Sabang Beach (Secret Spot) and it was clean. I thought my baby and I would be able to hang out more on the beach. I even bought toys that she can use while we play on the beach, but it really wasn’t a good sight.

Whatever the view lacks, the people have. The weather might be gloomy, but the people, including the owners of the Old Parola were very warm, friendly, and very accommodating. We actually just spent 4 days walking along the beach, lounging on their duyan, and trying their food (The Shack serves very good food!). We hired a tricycle to tour us around for half a day (Php400) and we visited the Diguisit Falls and Beach, Ermita Hill, Balete Tree, and the Pier. We skipped the Dimatubo Falls because the people told us that it will be around 40 minutes to an hour of hiking, and we didn’t feel ready (we have not exercised for a long time!) We were supposed to walk to the Museo and Aurora Quezon’s house, but there was a power outage during that day so they were closed.

On our last day, we tried to surf. I was kind of trying to delay doing it because I wasn’t confident enough that I can have a good ride again (being a fatty and all. haha!) I didn’t get a good ride. But, it was fun to be out there chasing waves again.

Check out our Baler video here.

2 thoughts on “Our Budget and Family Friendly Baler Itinerary”