This was one of the trips that started with, “Let’s try something new.” The next thing we know, we’re on a bus going to Ilocos. No transportation nor accommodation booked ahead. Not even a budget or itinerary planned. One day, we woke up and decided we wanted to go around Ilocandia (Ilocos Sur and Norte) in three (3) days, without going over-budget.

I went with my childhood friend, Babes. Unlike most of the people who claim to be close or best friends, we really don’t talk every day, but when it comes to something new and crazy but budget-friendly, she’s one of the few people I think of inviting first. No hassle, no drama, no “arte” (not picky), a tightwad like me, has a huge heart for exploring and trying out something new, and someone who trusts my planning skills (haha!), that’s her.

We actually thought about the trip around March, but since we were both teachers, we had to wait for the classes to officially end and for summer vacation to start before we could start packing. We left a week after the last report cards were given and a week before the Holy Week, the season when people flock the bus terminals to go to their respective provinces.

We really planned to take the night bus, so that we could sleep during the trip. In the Philippines, April is what we usually call the “vacation season”. It is when classes end and students, along with their family, go anywhere just to spend time away from the city (and the school) for at least a week to a couple of months. Trips are expected to have been booked even months back. Since we did not book any trip at any bus station, I tried on the off chance to go bus-terminal-hopping earlier than our planned departure time, so I could get a hold of bus tickets to Ilocos. I first went to Partas Bus Terminal in Cubao, a known bus line that caters to people going to the Ilocos Region. I haven’t even stepped a foot inside the building and I knew, we won’t have a chance on getting a bus going to Ilocos from there. The terminal is filled with people waiting to get on a bus! 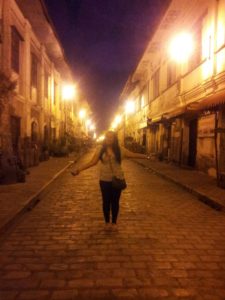 I went back walking along EDSA, trying to find out another way to our destination. Good thing, my search led me to Dominion Bus Terminal, which only added new trips to Vigan that month. So, I decided to wait and send a message to Babes to meet me there. We were able to get on a bus at around 8:00 pm, which left at exactly 8:30 pm. It was a very long journey, but we slept all throughout the trip. We arrived in Vigan at 4:30 am the next day.

You know what’s good about arriving early? We were able to enjoy Calle Crisologo, a heritage site, one of the wonders of the world, all to ourselves! I was able to get a better look and appreciate the beauty of the street and take good pictures of it.

The bad thing about it is that we were carrying our heavy bags around while we walked. We thought it was too early to check into any hotel, so we walked around checking out all the sites while we wait for the sun to rise. That is actually what we did for most of the trip — we walked! Cheaper and healthier, that way. 😉

After walking around the streets of Vigan very early in the morning, we decided to proceed to Vigan Hotel. I found it while searching online for affordable places to stay there. Among all the other hotels around the area, it is the cheapest (at only PhP595 for a fan room with two beds and free coffee, compared to others which cost around 2000 bucks and probably more.) We weren’t really picky since we only needed a place to sleep and to keep our things safe while we go around the city. But, it had everything we need and more (it had WiFi! woohoo!). We actually only stayed there for a night since we needed to leave early for Laoag the next day.

We were able to check in by 6:00 am, rested for a bit, then went out around at 7:00 am. We opted to walk around and ask the locals where best to eat, where the good places are, and how to get there. To maximize our day, we decided to get a map from the Tourism Office, which opens early, by the way.

The map showed how close all tourism spots to each other, that we decided to walk to each starting from KuboVille, where we had breakfast. The restaurant served good affordable meals (I think I got my LongSiLog – Longganisa, Sinangag (Garlic Fried Rice), and Itlog (Sunny-side up fried egg) – for less than a hundred bucks.) After that, we walked towards Pagburnayan, a jar-making factory, where we learned how to make jars out of clay.

We actually miscalculated the distances (hey! they looked really closer to each other on the map!), that instead of walking towards all tourist spots, we just decided to just ride a tricycle to some. If you’re planning your own trip and would like to do it the same way we did, I suggest that you hail a tricycle from each destination than booking a tricycle tour going around. It’s cheaper to do it on your own, since tricycle fare is only about Php20 per head, per way, while tours cost about 600-700 pesos for half a day.

We then went to the Hidden Garden, which had amazing pots and plants, then to former Gov. Chavit Singson’s Baluarte, a mini-zoo. Both are free of charge, by the way. We then went on a historical river cruise at the Mestizo River, which cost us about 50 pesos (using our student ID. haha! 100 pesos for regular people). It was actually quite a bore since we can barely hear the recorded audio, detailing the history of Vigan. However, the scenery was a really peaceful treat, which we actually needed after a very long and tiring bus trip from Cubao.

After the cruise, we decided to walk towards the Abel Weavers, which, according to the map, was just a few blocks away. We walked for a good 15-minutes, and since we can’t see any signs that we’re getting near, and it was a very hot day, we changed our minds and hailed a tricycle to go back to our hotel and took a well-deserved cold shower.

Remember my personal travel rule no. 1? If you haven’t read it yet, you might want to read it here first. Well, my next rule is related to it, which is to, “Never make a side trip to impress the parents of the person who never really liked you, especially if making a trip to impress that person never worked in the first place.” hahahahaha!

One of the reasons why I wanted to go to Ilocos was that I know the guy I used to have a crush on grew up there and that I wanted to meet his parents. (I’m sure you are snickering or probably shaking your head by now, on how crazy I could get for a guy I like, which I promise not to do EVER again. But this movie tells me, it’s perfectly okay to do stupid things for the right guy. haha! I was actually invited a couple of months back by his mom and aunt to come visit them and attend his brother’s high school graduation celebration, but since I had work, I could not oblige. But then, you know I shouldn’t, since HE didn’t invite me. right?? Okay. Going back to my story before I make further justifications for my crazy-stupid actions… )

I never really told Babes that we were going to make a side trip to Rancho in Santa, a town about an hour away from Vigan. (I didn’t even know it was that far from the city.) So, after changing clothes at our hotel, I dragged her to the plaza to ride a public van going to Santa. Before she can actually complain, I told her we will only be there for lunch and we’ll sure be back before museums in Vigan, which are what we actually planned to see, close at around 4:00 pm. The van left at around 12:00 noon. If you calculate the travel time to and from Santa, you know that we could only stay there for about an hour, so we could reach Vigan in time.

I did bring delicacies from Antipolo (my hometown), which I hope the family enjoyed. His mom prepared a delicious lunch for us. His parents were very amicable and accommodating, and they have a very nice house (lots of mango – my favorite fruit – trees in the backyard). His mom even toured us around and brought us to the mouth of Abra River, one of the largest river systems in the Philippines. We actually wanted to stay and chat with her, but if we wanted to see the museums, we had to leave. So, before Babes (who actually politely told his mom that we had to go) kill me with her stares, we already boarded a tricycle going to Santa.

Historical tour on a Calesa

We reached Vigan half-past 3:00 pm. We could actually just walk to different museums because they are only around the plaza. But since we were there late in the afternoon, we were kinda afraid that we won’t be able to get to them on time. You see, we’re only in Vigan for a day. We can’t afford to miss our chance. So, we decided to ride a calesa (a horse-drawn carriage). It’s only 150 bucks per hour.

Since we were quite late, we were only able to visit two ancestral houses, the Crisologo House and the Syquia Mansion, and the Burgos Museum. We also passed by the Bell Tower in Bantay and watched the sunset from there. The whole trip actually took about an hour and a half. Our last stop was at McDonald’s to get an ice cream sundae trouve ici. We did make a pact to only eat local food, but since it was so hot that day, we can’t really resist the urge to eat “Manila-food”. haha!

We kind of regretted riding the calesa though. Don’t get me wrong, it wasn’t because the cuchero’s service was bad. He was friendly, actually. It was because we were thinking about the horse’s plight the whole time. During the ride, all I could think about was if I were too heavy for her to carry or if she’s getting tired and thirsty already. As much as we’d like to support the tourism industry by availing the local’s products and services, I hope they don’t abuse animals like this.

We capped our day by eating the famous Vigan empanada and watched the fountain show at Plaza Salcedo. They were both amazing. We also met two of Babes’ friends and had a bottle of beer (or more for some of us) each with them at Calle Crisologo.